Seniors conduct meaningful research across a variety of subjects

The physics Senior Capstone has existed long before the University made a SAGES capstone a requirement in 2005. In fact, the CWRU Department of Physics started requiring a senior project of its majors in 1995. Before this, certain students were invited to do honors research in their senior year, while the remainder of students took a two-semester “Senior Lab” course in the spring of junior year and fall of senior.

When the department’s senior project program began, students were mostly left alone to complete one year of research and give an end-of-the-year presentation. To enhance the quality of the work and experience, additional aspects — such as the research proposal, progress reports, and research contract — were added, both to hold students and advisors accountable and provide structure. A seminar course about professional ethics and other aspects of research were added at the suggestion of students.

Professor Chottiner co-taught the physics senior project from 2000-2010, and took over the course for the current academic year, with a class of 16 seniors.

“I suspect that our capstone program has more formal expectations and is more complicated than most (or any) others on campus,” he said.

Two of this year’s projects are highlighted below.

Information about the current senior projects can be found at https://casgroups.case.edu/physics-senior-projects/senior-projects-class-of-2020/ 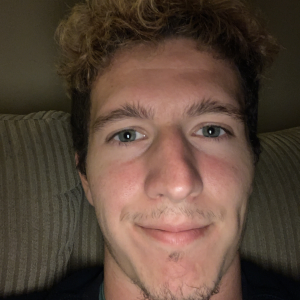 In addition to budding astrophysicist, Dom Oddo is a varsity track athlete and member of the CWRU Women in Physics and Astronomy Club

Domonic Oddo graduated this year as a physics and astronomy double major. For his senior project he worked with Professor Ben Monreal on a new optical telescope design for detecting exoplanets. Dom began working with Professor Monreal over the summer in 2019 doing simulations on the telescope’s ability to see through the atmosphere. His senior project research focused on simulating stellar and exoplanet environments to determine how well the telescope would be able to detect exoplanets. One big discovery of his project: “The telescope works, that’s exciting!” The simulations Dom created allow him to see a “measurable difference [in the telescope’s ability to see exoplanets] between different stars depending on what their characteristics are.” The results of these simulations will allow the telescope’s observing time to be focused on stars around which it is most likely to be able to see exoplanets, helping increase its efficiency and success.

Dom has been interested in exoplanets and extraterrestrial life since doing a numerical analysis of the Drake equation in high school. He says of his senior project, “It’s just exciting to be able to do something that I think is cool and meaningful!”

Dom will attend the University of New Mexico for a PhD in physics and astronomy in the fall. He feels that his senior project experience has been good preparation for graduate school. Outside of gaining specific experience in a field of interest to him, Dom values his senior project work as he’s learned about the research process generally. From starting with an idea, to turning it into a scientific question, to reading the literature, the senior project experience encompasses the entire research process. As a result, Dom says “I feel like I’ve built like a good research background … in either physics or astronomy.”

Looking back at his time at CWRU, Dom notes that “Professors in this department are really helpful if you go out and ask them.” While he’s looking forward to starting his time at the University of New Mexico, he feels that “with all of the people that I’ve met and the connections that I’ve made and all the things that I’ve learned in my classes, it has felt like something that’s been very valuable in terms of life experience.”

2020 graduate Tom Ugras majored in engineering physics with a concentration in solid-state –  a subset of the electrical engineering concentration. Tom has been involved in research for several years in two groups. In Professor Kathleen Kash’s lab he has worked on growth of crystal semiconductor materials. With Professor Xuan Gao, Tom completed his senior project researching charge mobility properties of hafnium diselenide (HfSe2), a transition metal dichalcogenide with potential as a 2D transistor.

One of Tom’s favorite tasks for his project was exfoliating his 2D samples from bulk material using the Scotch tape method. To do so he placed the material on Scotch tape and peeled it apart until he was left with 2D flakes – this takes dozens of peels, and during the process “you can see the layers split in front of your eyes.” Tom also enjoyed experimenting with heterostructures – stacking different 2D materials to change the electric properties of the device. Because of the nature of the materials, “if you move one material one millimeter or even a micron it completely changes your heterostructure.” As part of his project he has enjoyed “seeing how those small changes manifest in device structure.”

Next fall, Tom will be starting a PhD program at Cornell University in applied physics. He didn’t always want to be a physicist though. When he came to CWRU he was intending to major in accounting, but thought he might try out engineering. Then a friend convinced him to join the engineering physics major and “stuff just kinda fell into place and here we are.”

Research experience has been an important part of Tom’s time at CWRU, allowing him to get his “toes in the water with research.” In terms of deciding on his graduate school path, Tom says that “working with both [Prof’s Kash and Gao] opened the door to research for me and from there I did my own exploration,” which led him to his decision to attend Cornell next year.  Tom’s advice for other undergraduates at CWRU:  “The earlier you can explore research the better.”