“I’m impressed that so many people showed up this morning without donuts supplied by the department,” commented Professor Gary Chottiner, chair of the Senior Project Committee, before pausing the Zoom recording at the start of the lunch break.

Normally, there would be sandwiches and mingling as students, professors, staff, and friends discussed the talks before sitting down for the second half of the day. At this year’s symposium, attendees prepared their own lunches at home before tuning back in. The Physics Senior Project Symposium takes place every spring before finals week. Graduating seniors each give talks about their senior capstone projects on which they’d been working for the past two semesters. This year, the community convened virtually over Zoom, much as they have for classes and meetings since March. 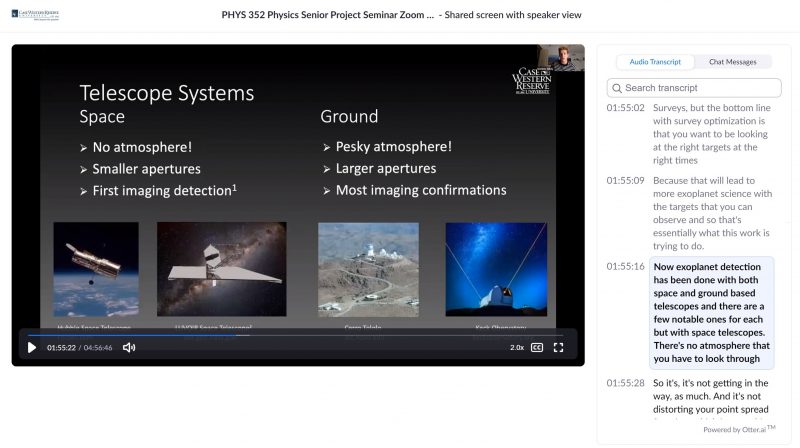 A screenshot from the 2020 CWRU Physics Senior Project Symposium

When Case Western Reserve University announced the move to remote learning on March 10th, plans were thrown into disarray. Students found themselves making travel arrangements, preparing for remote coursework, and in the case of the physics senior project class, wondering how their research would be impacted.

This year’s physics senior projects varied widely from experimental work with semiconductors, to computer modeling of muscle contractions in sea slugs. Some students with computational or theoretical projects were lucky, and could continue without interruption from wherever they found themselves after the reshuffling. Dominic Oddo, whose project was a simulation of an exoplanet telescope says the transition “actually gave [him] more time and flexibility to work on it.” Others were less fortunate and found themselves barred from labs just as they were about to finish projects. Tom Ugras’ project on fabricating 2D transistors was stalled at just the wrong time. He had several devices fabricated and was “at a really good point…going into spring break,” but never got to perform tests on those devices.

The interdisciplinary nature of the talks demonstrated how physics concepts and techniques can be applied across disciplines as varied as biology and art forgery, in addition to more traditional physics fields.  |  View ALL 2020 senior projects here

Nonetheless, the talks given at the virtual symposium on April 29th displayed incredible work across the board. On topics ranging from nanowires to ballooning spiders, students showcased two semesters of hard work. The interdisciplinary nature of the talks demonstrated how physics concepts and techniques can be applied across disciplines as varied as biology and art forgery, in addition to more traditional physics fields. The student work reflects a department with wide research interests including cosmology, condensed matter, biophysics, and acoustics, among many others.

The virtual symposium took place between 10am and 4:30pm. Fifteen graduating seniors gave 20 minute presentations summarizing their work, using the Zoom screen sharing feature to present slides. The event was kicked off with a 10 minute progress report by yours truly, as I had just finished the first semester of my project. Although nothing could replace the chance to meet together in person to celebrate the students’ accomplishments, the symposium was still a success.

And in some ways the virtual event had benefits.

Graduating senior Rebecca Lalk said, “My parents and sister all called in, which was really nice,” and extended family was able to watch the recording of her talk on semiconductors at a later date. Throughout the day, the Zoom chat was filled with congratulations and well wishes to the speakers, and many applause emojis appeared over participants’ videos as each speaker finished up.

Another tradition carried on dispute the disruptions: awarding of the Polykarp Kusch Prize for outstanding senior thesis. This year there were four winners: Joshua Holmes who modeled the molecular motor myosin 11, Brendan O’Donnell who used magneto-optics to create an immunoassay for Lyme disease, William Schmid whose computational project made great improvements to a program for nanoscale visualization of diffusion, and Tom Ugras whose 2D transistor project impressed the committee despite disruptions.

Graduating senior Rebecca Lalk said, “My parents and sister all called in, which was really nice,”  and extended family was able to watch the recording of her talk on semiconductors at a later date.

All in all, it was another successful year for student research in the physics department. Graduating astronomy student Julia Falcone, who attended the symposium virtually, reflected “I had a really fun time watching the culmination of so many months’ work as everyone discussed their projects and the strides they’d made in their respective fields despite all the pandemic-related obstacles.”

CWRU community members can watch the talks from this year at https://cwru.zoom.us/rec/play/7MEvc-qq_Go3GNKV5ASDBqB-W47pePqs1CMW8_oJzEiyAXRWMFP1ZLoRYObTfHa0oCHslVGrgHZjWtt4?continueMode=true. (Must sign into Zoom)

More information about this year’s physics senior projects can be found at https://casgroups.case.edu/physics-senior-projects/senior-projects-class-of-2020/.

Physics senior projects from previous years can be found at https://casgroups.case.edu/physics-senior-projects/# .