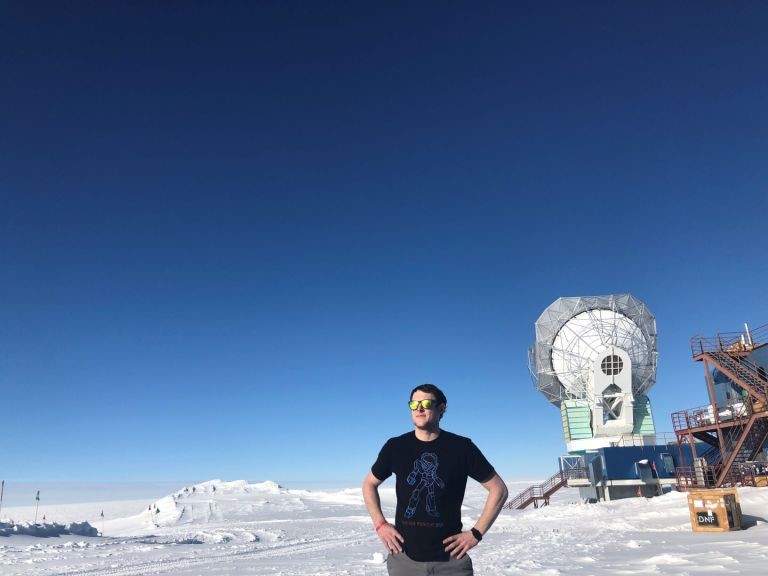 From Allen’s blog: Jan. 8 – Day 9 on Ice. Allen standing outside the Dark Sector Lab (DSL) which contains SPT on a “warm”, roughly -12F day, with a slight breeze.

March 27 – Day 88 on Ice: “We got our winter-over numbers yesterday; I’m number 1581. This means that (including this year) there have only been about 1600 people to have wintered at the South Pole… It’s a pretty humbling number. I’m one of only 0.00002% of the population of people on Earth to winter-over at the South Pole.”

Allen Foster, a 4th year physics PhD student working in Dr. John Ruhl’s research group at Case Western Reserve University, never dreamed he’d have the opportunity to visit the South Pole. Yet, he’s now been there since January 1, 2020, and will be until November doing everything from Cosmic Microwave Background radiation data analysis, to operating and maintaining the third generation south pole telescope, to running and winning the annual South Pole half marathon.

Foster is currently “winter-overing” (WO) at the Amundsen-Scott South Pole Station, specifically to operate and maintain the 10-meter telescope and 3rd Generation South Pole Telescope receiver, or SPT-3G. Approximately 40 WOs are living at the station and working on various projects or capacities, but Foster is only one of two people tasked with operating SPT-3G. Day-to-day, that means scheduling observations, analyzing real time data, performing mechanical fixes as needed, and greasing gears about once a week. Though he’s been there since January, the official winter-over period lasts from February 14 to early November 2020, during which time there are no scheduled flights to and from the South Pole. In other words, the WOs are stuck no matter what.

The SPT-3G collaboration includes several universities and two national laboratories. The collaboration’s mission is to observe the Cosmic Microwave Background (CMB) radiation of the universe, which is the remnant heat leftover from the Big Bang. 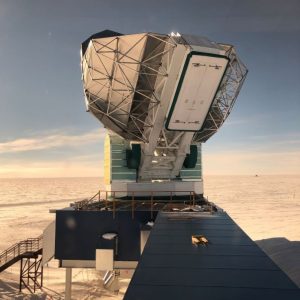 From Allen’s blog: Jan 7 – Day 8 on ice
From the Author: “SPT from the 2nd floor of DSL. The white rectangular box with doors at the end of the telescope boom is the “Receiver Cabin”; a room where the receiver (the camera) is held. All of the readout electronics are also located in this cabin. The drive system for the telescope lives in the blue building underneath, called the “Control Room”. The telescope is designed to be able to dock to the control room, which has a sliding roof, and then we can enter the receiver cabin from the control room below.”

The SPT-3G collaboration includes several universities and two national laboratories. The collaboration’s mission is to observe the Cosmic Microwave Background (CMB) radiation of the universe, which is the remnant heat leftover from the Big Bang. Studying the CMB is hoped to reveal the origins of the universe and its evolution, as well as provide insight into the nature of galaxy clusters, active galactic nuclei, and dusty star-forming galaxies.

Foster’s involvement in CMB research started with his graduate student work testing detectors in Dr. John Ruhl’s lab. During the Austral Summer of 2017-2018, Foster made his first trip to the South Pole to install those detectors, and after going back the next Austral Summer for another 1.5 months, he decided he might actually be interested in the full winter-over experience. Even if it means enduring six months of total darkness.

Since the day he started packing, Foster’s been keeping a record of his experiences through his blog. In addition to frequent weather updates and technical insights, he’s especially been documenting the various sources of recreation, including parties, movie nights, and exercise.

According to one of Foster’s blog posts, “Parties at South Pole are taken very seriously by the hosts. Annual traditions such as the carp party (and next weekend’s SPT Ladies’ Nights) are sources of excitement down here, and no one wants to disappoint the station population.” With work weeks stretching either 6 days a week for government contractors or 7 days a week for grantees, and with wildly varying hours, Foster writes that “it’s nice to have a weekly event in which to relax and hang out with people outside your department.”

Once the workday is over for Foster, he says he likes to dedicate his entire evenings to social activities or exercise, and that it’s the simplicity and routine of daily life that he’s enjoyed most. Every night there’s something going on, whether it be basketball, soccer, volleyball, or weekly movies and TV shows. There’s also the South Pole Triple Crown fitness challenge to occupy the WOs’ time, which includes exercising cardio the equivalent distance to McMurdo Station (835 miles), lifting the equivalent weight of all the cargo delivered to the South Pole during the summer (something like 1.75 million pounds), and climbing the elevation equivalent of Mr. Everest, all by the end of the winter-over period. Foster is no stranger to such challenges; earlier this year he even won the annual South Pole half marathon race back when it was warm enough (~-15F) to run outside. Despite it now having reached as low as -80F outside, however, there are still plenty of activities and ways for the station inhabitants to engage and stay fit.

“The feeling that I am such an insignificant speck in the history of the universe somehow makes me feel more empowered. I think everyone in society would benefit by feeling a little less significant.” 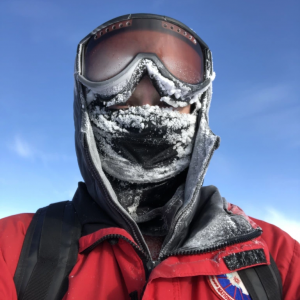 From Allen’s blog: Feb 18 – Day 50 on ice
From the author: “I went skiing with some folks on Sunday, got about 6miles. It’s a slow slog at times, but can be kind of meditative once you get into a groove… Goggles froze over pretty quickly, so I used them to block sun/wind as best I could. The hard part is keeping your eyelashes from freezing to stuff. Temps were around -40F with light winds.”

Looking to the future, Foster’s not entirely sure what direction he wants to go after graduating, but of his time at CWRU, he says he’ll miss most of all the work environment, working with Dr. Ruhl, and playing ice hockey with the CWRU club team. For the undergraduates reading this, his greatest advice is to be flexible, whether it’s deciding if graduate school is a good fit or simply deciding to what you dedicate your time.

And when it comes to studying astrophysics and cosmology, these are the thoughts that keep him going: “The expanse of the Universe is astounding. The feeling that I am such an insignificant speck in the history of the universe somehow makes me feel more empowered. I think everyone in society would benefit by feeling a little less significant. It’s also really interesting to know what we can understand so much about our universe by observing radiation leftover by the Big Bang itself – it really is mind boggling.”

To keep up with his adventures at the South Pole, check out Allen Foster’s blog at frostyfoster.travel.blog

For information on CWRU Department of Physics research in cosmology and particle-astrophysics, visit https://physics.case.edu/research/research-focus-cosmology-astrophysics/