The cloud is anything but soft and fluffy. It’s this horrible, energy-gobbling thing. 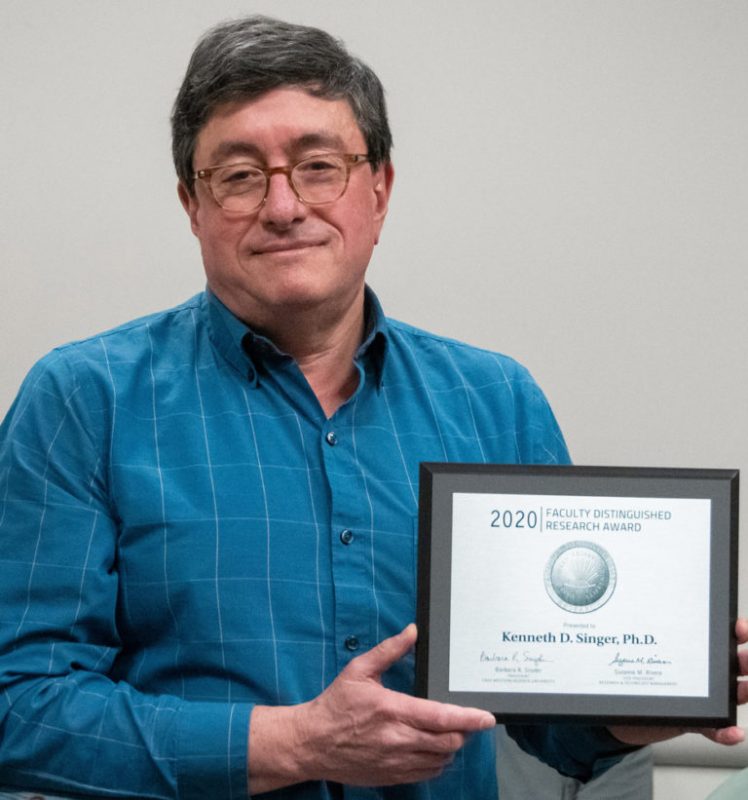 Professor Singer won the Faculty Distinguished Research Award this past Spring for his work in optics and soft materials. This research has fueled the development of Folio Photonics.

This was how CWRU Physics Professor Kenneth Singer portrayed the reality of modern data storage centers. According to his start-up, Folio Photonics, the total amount of stored data will reach 7.5 zettabytes (or 7.5 billion terabytes) by 2025. A large portion of this data will be taken up by medicine, finance, and media, and other information needing long-term access.

But data storage allocation may not even be the area requiring the greatest innovation. Another issue facing enterprise data centers, and in turn limiting their storage capabilities, is climate control.

A burden faced by major companies reliant on archival data storage is not just how to store everything, but where to put their massive data centers. In fact, when discussing the prospects and value of his optical-disc technology, Singer remarked that it was frequently the first question on every company’s minds. “It’s the first question that the Amazons and Googles ask us: ‘Can you store it in the summer in Louisiana without air conditioning?’”

Much like the people generating the data they store, hard discs are sensitive to their environmental conditions. If you cannot provide a stable temperature, humidity level, or suit their power needs, then error and failure rates go up.

“For every dollar that’s spent in a data center to run the equipment, two dollars are spent to keep it at the right temperature and humidity.”

The necessity for a stable storage environment means that data centers will soon account for up to 20% of all electricity use, according to Singer. His assignment of the term “energy-gobbling” may have been an understatement.

Attempts to circumvent climate control variables have led companies to open facilities in the Arctic, where overheating and humidity aren’t exacerbated by the exterior climate. But Folio Photonics’ DataFilm™ technology may well enable locations to be hubs for efficient data storage. In making data centers more suitable for cheaper, accessible regions, providing space for that looming figure of 7.5 zettabytes appears more viable.

Folio’s optical film can be realized in the form of tape or disc technology and is write-once. This means that, unlike current optical technology, the data is more robust and less temperamental when it comes to climate specificities. Other mediums of data storage, such as hard discs and solid-state drives, are read-write, which limit their longevity.

“The data has to be recopied every 5-10 years,” said Singer. “That’s not cost effective for keeping things for 100 years.”

Folio’s roll-to-roll manufacturing innovation makes them scalable in terms of capacity, which differentiates them from other kinds of optical technology. These properties combined cause Folio’s film to possess clear advantages in terms of cost per terabyte, which Prof. Singer highlighted as a metric in the industry, and also with their long-term utility.

An extract from the Folio Photonics website that highlights the discs’ design. Singer’s DataFilm discs, by virtue of their multi-layered design, pose a number of benefits for the data storage sector.

For professor Singer, realizing these advantages came naturally through his background in physics. It was all part of work he did at CWRU through the National Science Foundation Center for Layered Polymer Systems (CLiPS), which was especially active from 2006-2016.

He stated that CLiPs focused on multilayer coextrusion. It’s a process used quite frequently in manufacturing plastics, such as containers and high-tech optical filters. Rather than construct layers one-by-one, as with previous optical data storage technologies, all the layers are extruded at once. This gets around problems related to defects and yield-reduction, making extrusions more efficient in terms of storage and economics. Folio’s film prospects were only improved as Prof. Singer’s lab innovated further and improved their multi-layer writing capabilities.

This period of work was crucial in designing the materials and structures in a way that lowers the power threshold required in the writing process. Combined with their environmental durability, DataFilm™ media are remarkably efficient and effective options for archival data storage at the enterprise scale.

The importance of interdisciplinarity

While we might assume that engineers and computer scientists are the ones driving innovation in the field of data storage, Singer’s background in optics and the way light interacts with materials allowed for a rich understanding of the technology at play.

Toward the end of the discussion, Singer remarked the promising prospects of DataFilm™ all began with that initial work through the CLiPS Science and Technology Center. In particular, he highlighted the interdisciplinarity that both the Center and CWRU provided as being instrumental.

“That’s one of the things I’ve enjoyed the most about Case is that I’ve been able to collaborate with people in different departments, and interact with students and faculty in those departments,” Singer said, calling back to the foundations for what has become his primary project.

“The only way interdisciplinarity works is if the disciplinarity of the individual disciplines is deep. If you make the effort to teach each other the language of your field you bring in the synergy. You create something that you couldn’t have done individually.”

Professor Ken Singer is the Ambrose Swasey Professor of Physics, founding director of the Materials for Opto/Electronic Research and Education (MORE) Center, and recent recipient of the 2020 Faculty Distinguished Research Award at Case Western Reserve University. Dr. Singer’s company, Folio Photonics, was founded as a spin-off from CWRU and the National Science Foundation Center for Layered Polymeric Systems, after emerging from an on-campus laboratory collaboration. Folio Photonics is poised to disrupt the existing digital data archival storage industry due to its ability to significantly drive down costs. Professor Singer will be teaching a course in laser physics in the spring.