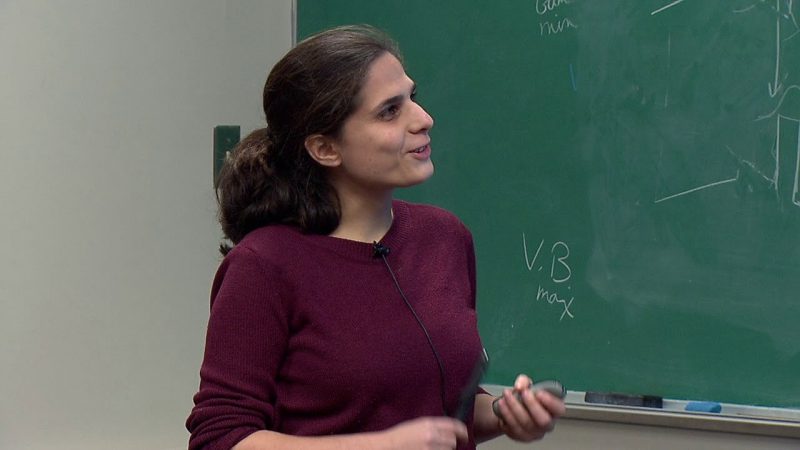 Audrey Bienfait delivering one of the Michelson Postdoctoral Prize lectures at CWRU.

We are all familiar with communicating information with acoustic waves, better known as “sound.”  Now, sound has been brought into the quantum realm, where individual quanta of sound can be used to transmit quantum information.

Quantum physicist Audrey Bienfait and her team have made breakthroughs in the use of acoustic waves to transfer quantum information, which is traditionally transferred by either optical or microwave photons. Working with Prof. Andrew Cleland at the University of Chicago, her team used small-scale acoustic “earthquake waves” to transfer quantum information via phonon, which is the unit of vibrational energy in quantum physics. Bienfait explained how this works in a broader sense, saying

“Well, it’s really like you have two cities, New York and Chicago and you have a rail on which you can send earthquake waves and try to transmit information through these waves.”

Bienfait and her team created a launcher that emitted these acoustic waves and recaptured them when they were reflected off another surface. She elaborated on this launcher saying, “So basically, we have this ideal artificial quantum bit that can send this wave. So [it can] transfer its information from a fixed position to a traveling sound wave and then capture it again.” This transfer model has greatly expanded scientists’ understanding of acoustic waves and how their quantum nature behaves.

In addition to the work in phonons, Bienfait and a team at Université Paris-Saclay have demonstrated the quantum limit of detecting electron spin resonance (ESR). Spin refers to a specific magnetic property of electrons, and is at the heart of “spintronics,” which holds immense potential in information processing and storage as well as optics. Previous techniques for ESR were based on large electromagnets — coils of wire that would not have looked out of place in Tesla’s lab at the turn of the twentieth century. Again, the trick was to move to the quantum realm where an electrical current in a wire is replaced by the smallest unit of electromagnetism, the photon, traveling through a superconductor.  Bienfait’s breakthrough technique is nearly 10,000 times more sensitive than the previous state-of-the-art inductive ESR detection — an unprecedented leap forward in spintronics.

The 2019 Michelson Postdoctoral Prize was awarded to Bienfait “for her groundbreaking experiments demonstrating the quantum limit of sensitivity in electron spin resonance and entangling superconducting bits using phonons.” Bienfait is a condensed matter experimentalist who works in the area of quantum circuits with a particular focus on electron spin resonance and superconducting qubits. She completed her doctoral work at Université Paris-Saclay in 2016, was a postdoctoral fellow at the Institute of Molecular Engineering at the University of Chicago and is now a faculty member at Ecole Normale Superieure in Lyon.

Bienfait’s breakthroughs are making waves through the quantum physics world and have major implications for the future of quantum computing and communication. As the winner of the 2019 Michelson Postdoctoral Prize Lectureship [MPPL], she delivered three seminars and a physics colloquium on CWRU’s campus.