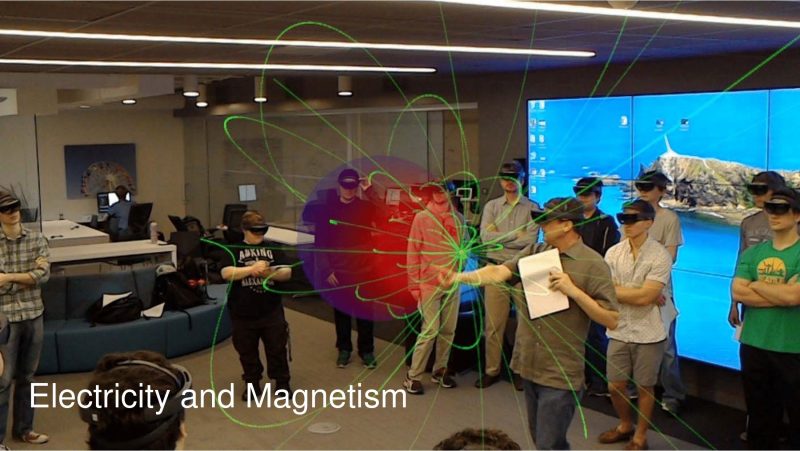 Physics comes to life for Professor Martens’ 2017 electricity and magnetism class at the Interactive Commons. The class views the electric field lines in green produced by a point charge sitting outside a conducting sphere, shown in red.

“I wish I had a three-dimensional chalk board,” physics Professor Michael Martens recalls thinking when he first taught electricity and magnetism at CWRU. He found that students had a hard time visualizing electric and magnetic field lines, and was limited in his ability to represent them on the two-dimensional blackboard. So when Martens heard about the work being done with Microsoft HoloLens at the CWRU Interactive Commons he immediately thought, “We’ve got to be able to use this somehow to teach physics.”

Martens wasted no time in getting on it. He received an Active Learning+ Fellowship from the Teaching and Learning Technology Team at University Technology (UTech) and spent a summer working with then undergraduate Jake Carlen developing a HoloLens app for teaching electricity and magnetism. In 2017 he rolled it out, setting aside three class days to take his students to the Interactive Commons for a lecture.

Martens says he really enjoyed working on the app.

“I love the programming and that sort of challenge of getting it to work.” But he’s avoided getting caught up in what he calls “the cool-factor.”

“I wanted to go beyond the cool-factor and see how this does,” he says, adding, “The idea of using this as a teaching tool is what really interests me, and to do that you have to ask yourself the question: ‘Is it useful?’”

“That’s it, that’s what I’m looking for… the students are able to see the same thing, they can see each other, they’re working together with this HoloLens.”

In the first few classes he taught at the Interactive Commons, he wasn’t sure. But something clicked during the final HoloLens class that semester. He realized the night before class that he had made a mistake, the directions of the fields were backward. It was too late to make any changes, so in class the next day he simply asked students if it was correct. Suddenly the class came to life, arguing over the answer, walking into the hologram and gesturing to classmates.

Martens thought, “That’s it, that’s what I’m looking for… the students are able to see the same thing, they can see each other, they’re working together with this HoloLens.”

Since developing the electricity and magnetism app, Martens has taught a trial run of a course where students develop their own physics-based HoloLens apps. Although the initial learning curve for programming for the HoloLens prevented any apps from being completed, students had a wealth of great ideas for pedagogical physics apps. Ideas ranged from visualizing the Coriolis force, to zooming in on crystal structures, to designing and exploring stress and strain in bridges.

And Martens is thinking outside of the physics department as well. He just received  a Nord Grant from the University Center for Innovation in Teaching and Education (UCITE) to set up a lab to develop HoloLens apps. He hopes to employ students who are interested in app development to work on apps requested by professors across CWRU. Because of the large overhead of learning how to program for HoloLens, it’s tough for a professor to make their own app, but Martens sees possibilities across disciplines and wants to make the technology accessible.

He hopes as the HoloLens is used more widely in educational settings, professors will be able to understand how well it works for the students, and how it can best be used to make learning more effective. Although he’s still learning about the possibilities, he has high hopes. Martens’ big dream is for CWRU to be known as “the place they have HoloLens’s everywhere.” With the new grant, maybe that dream is getting closer to reality.