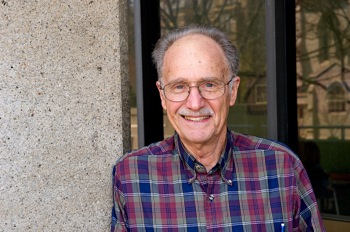 My interests and research activities, and those of an associated group, have been in determining the properties of solids from a knowledge of the underlying electronic structure of the solids. In some cases, these properties have already been measured; in others they have not yet been measured. In still other cases, the materials themselves have not even been synthesized! In the latter two cases, our work is to predict the properties. If the properties are sufficiently interesting from the scientific and/or technological perspectives, such predictions could provide motivation to produce the new material or, if it already exists but only with relatively poor quality, to improve the quality. A partial list of the properties of interest are: the structural (the equilibrium structure of the solid and their lattice parameters), the elastic (how the solid responds to external stresses), the dielectric (response to electric fields), the optical (response to electromagnetic fields), and electrical transport (the ease with which the electrons and holes move under electric and magnetic fields). These properties are determined from the electronic structure which we obtain from first-principles calculations. That is, we start with only the atomic numbers of the constituent atoms and an assumed atomic arrangement, which is later varied. With improvements in the calculation methods and in computers, we are able to study increasingly complex and interesting solid state systems. The types of systems that we are currently studying are bulk crystals, heterostructures (two different solids in juxtaposition), superlattices (periodically alternating layers of different solids), surfaces, and alloys. Much of our efforts in recent years has been directed to the study of the electronic structure and related properties at interfaces. Particular effort has gone into the study of the interface between two different solids. The properties of these interfaces play a crucial role in heterostructures and in superlattices, both of which are at the forefront of semiconductor device technology. We are also concerned with the interfaces involving just one material but in which the material on one side of the interface has a different crystallographic or internal orientation than that on the other side. These are referred to as grain boundaries, and they constitute an important class of crystal defects. Still another type of interface that we are working on involves a semiconductor and metal. The properties of those systems relates to the important problem of the nature and properties of electrical “contacts” to semiconductors. Particular materials that we have intensely investigated in recent years are the wide bandgap semiconductors such as SiC and the Group III — nitrides and phosphides. Differences in the properties of various polytypic (different structural) forms that these materials assume — particularly SiC — are being studied. We have also been heavily engaged in a theoretical study of diamond films and their growth particularly by the chemical vapor deposition approach. Because of the great technological potential of these films they are the subject of intense study. Relatedly, we are also working on the so-called diamond-like amorphous carbon films, which are very hard materials.