The vibration microscope is an electromagnetically-driven adaptation by Hermann von 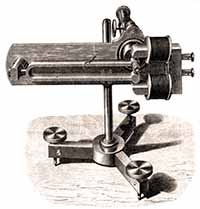 Helmholtz (1821-1894) of the earlier optical comparator by Jules Antoine Lissajous (1822-1880). The device allows one to determine the frequency of a tuning fork or other vibrating object with respect to a fork of known frequency, by way of Lissajous figure analysis.

The standard fork has a small glass lens attached to one of its prongs. If the standard fork is sounded, objects visible through the lens will appear to vibrate. A second tuning fork can then be positioned behind the hole, so that its plane of vibration is at right angles with that of the standard. When both forks are driven, a point on the second fork’s prong, viewed through the lens, will appear to trace out a curve. If the tuning fork frequencies are a fraction multiple of one another, simple Lissajous figures will appear (see left diagram below). However, if the frequencies are slightly mismatched, the curve will not remain constant, but change in a repeating way. Even if the frequencies are not identical, the difference between them can be deduced from the rate at which the pattern changes. 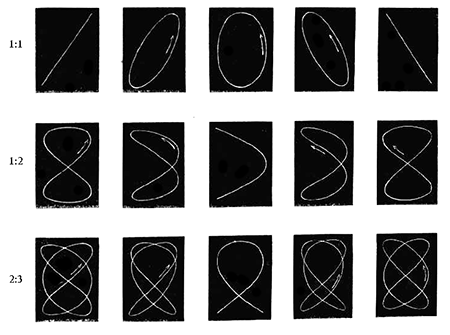