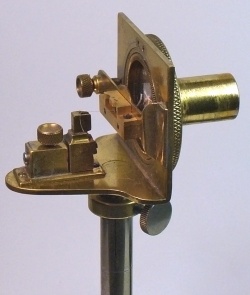 The phonodeik is an instrument designed by Dayton Miller. It allows one photographically to record the shape of complex sound waves more precisely than previously possible. As shown in the diagram to the right, sound waves are collected in a horn H, which is terminated by a thin mica diaphragm D. The mica is connected to a thin fiber, which is wrapped once around a spindle, and terminates at a spring S. Attached to the spindle is a tiny (one mm square) mirror M.. When sound impinges on the diaphragm, causing it to oscillate, the fiber rotates the spindle, tilting the plane of the mirror. A beam of light from point source P, focused by lens L, reflects off the mirror’s surface, tracing out the diaphragm’s oscillations onto photographic film.

The device was used by Miller in his work in acoustics. In particular, he was interested in quantitatively analyzing the sound produced by musical instruments. He sought to determine which properties of a given flute, for example, make it sound “better” than another flute. He used the phonodeik to record thousands of traces from various instruments, such as violins, clarinets, organ pipes, etc. These traces were then analyzed with the harmonic analyzer to determine the amplitude and phase of the fundamental and harmonic components of the sound wave. The component waves could subsequently be recombined into a single curve using the harmonic synthesizer. That curve was then compared to the original phonodeik trace, to determine how well the decomposition matched the original traces.

For demonstration purposes, a version of this device was made which magnified the diaphragm’s movement 40,000 times, projecting it onto a screen a curve up to 10 feet wide and 40 feet long. This allowed Miller easily to show large audiences the wave forms produced by voices, instruments, and other sources of sound. 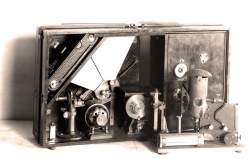 The name phonodeik, “to show sound”, was suggested in December 1909 by Edward W. Morley, during an American Physical Society (APS) meeting in Boston.

When combined with a rotating mirror, the phonodeik trace can be spread out along an axis, to show the waveform of the sound.