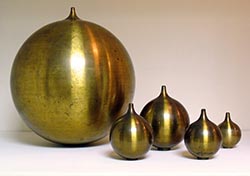 Helmholtz resonators by Rudolph Koenig. The top hole, or “nipple”‘, is placed in the ear, and air oscillates freely through the bottom hole.

Helmholtz described in his 1862 book, On the Sensations of Tone, an apparatus able to pick out specific frequencies from a sound. The Helmholtz resonator, as it is now called, consists of a rigid container of a known volume, nearly spherical in shape, with a small neck and hole in one end and a larger hole in the other end to admit the sound.

When the resonator’s ‘nipple’ is placed inside one’s ear, a specific frequency of the complex sound can be picked out and heard clearly. In Helmholtz’ book we read: When we “apply a resonator to the ear, most of the tones produced in the surrounding air will be considerably damped; but if the proper tone of the resonator is sounded, it brays into the ear most powerfully…. The proper tone of the resonator may even be sometimes heard cropping up in the whistling of the wind, the rattling of carriage wheels, the splashing of water.”

There is also an adjustable type, called a universal resonator, which consists of two cylinders, one inside the other, which can slide in or out to change the volume of the cavity over a continuous range (see illustration). This type of resonator is in use in the Fourier analyzer, and is equivalent to tone variator in its function.

Universal resonator from Koenig’s Acoustic Catalogue, 1889. Cost: 380 francs for a series of 14 resonators