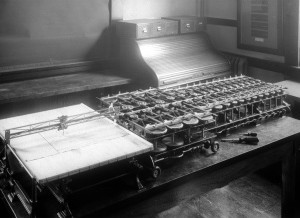 Photograph of the harmonic synthesizer used by Dayton Miller 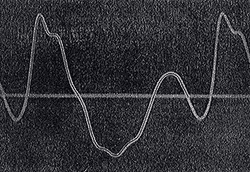 Lord Kelvin’s harmonic synthesizer is basically Henrici’s harmonic analyzer in reverse. Originally designed as a tide predictor in 1873, the system can combine numerous component waves—in some devices, up to 64 separate components—into a single curve. It is based on the earlier pin-and-slot device, which produces simple harmonic motion with the turn of a crank.

The version used by Dayton Miller was designed and built in the laboratory and instrument shop of the Physics Dept. of the Case School of Applied Sciences. It consisted of 32 rotating pin-and-slot devices (see diagram below), each of which produced simple harmonic motion with a specified amplitude and phase; these 32 elements controlled the motion of a single cable that traced out the combined wave with a stylus and sliding drafting table. It was used by Dayton Miller to check the results produced by the harmonic analyzer against the original phonodeik curve. This device is no longer in the CWRU Physics Dept. collection.

A curve representing the sound wave from a clarinet and twenty of its harmonic components. Source: Journal of the Franklin Institute, Jan 1916, p 73.

32 pin-and-slot devices arranged and interlinked by a single wire, which controls the motion of a stylus. 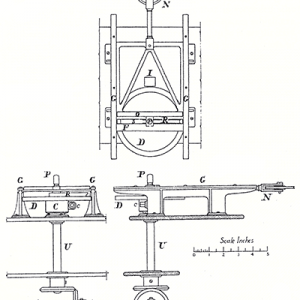 Details of one pin-and-slot element. The shaft U has a disk D connected to it by an adjustable cup-clutch C. The angular position of the disk with respect to the shaft can be varied, and is equivalent to changing the phase of the component wave that is being represented. The index I indicates the phase of the element. A pin P can be fixed anywhere along the diameter of the disk, within the slot along frame F; this frame is attached to the pulley N, and can glide freely forward or backward between the guide bars G. So, as the disk rotates, the fixed pin will force the frame F to oscillate forward and backward along the guide bars, following simple harmonic motion. If the pin is in the center of the disk (as pictured), the frame will not move at all as the disk rotates, but the further the pin is from the center of the disk, the larger the motion of the frame, representing a larger amplitude of the component wave. The cable that moves the stylus is wrapped around pulley N. Source: D. C. Miller in Journal of the Franklin Institute, Jan 1916, p 59.