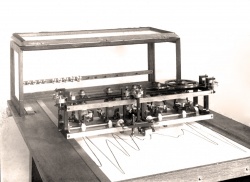 Photograph of the harmonic analyzer used by Dayton Miller, designed by G. Coradi of Zurich. A 1916 letter from Coradi to Miller, discussing this analyzer, can be found at Letter #24 in the department’s archive of historical letters.
The CWRU Physics Dept. no longer has this device in its collection. It’s whereabouts is unknown – but the word is that someone in the Case Math Department borrowed it in the 1950’s.

In 1894, Olaus Henrici (1840-1918) of London devised a harmonic analyzer for determining the fundamental and harmonic components of complex sound waves. It consists of multiple pulleys and glass spheres, called rolling-sphere integrators, connected to measuring dials. The image of a curve (for example, a phonodeik tracing of a sound wave) is placed under the device. The user moves a mechanical stylus along the curve’s path, tracing out the wave form.

The resulting readings on the dials give the phase and amplitudes of up to ten Fourier harmonic components. According to Dayton Miller, the harmonic analyzer was “developed and mechanically perfected by Mr. G. Coradi, of Zurich; and, as constructed by him, they are not only of beautiful workmanship, but they are also calculating machines of high precision” (J. Franklin Inst. Sept 1916. p 288).

Schematic of the pulley and ball systems for the ten component (top) and modified thirty component (bottom) analyzers.

Miller used the device in his work in acoustics and the theory of musical instruments beginning in 1908. He analyzed thousands of images of sound waves recorded with his phonodeik.  Once the components of a curve had been determined, he used a harmonic synthesizer to check these results, by recombining all the individual components into a new curve, which was then compared to the original phonodeik trace.

A more detailed description of how the analyzer works may be found in the Miller chapter of “Physics at a Research University: Case Western Reserve 1830-1990” by William Fickinger (Copyright 2005 ISBN 0-9773386-0-6)

This operating version of the “Henrici” machine is at the Department of Speech Pathology and Audiology of the University of Iowa. Videos courtesy of Roger J. Hanson, University of Northern Iowa.